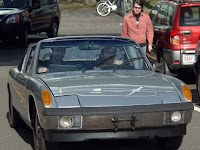 With a click and a hum, the sleek Porsche 914 pulled away from the curb while onlookers watched anxiously and the passenger gazed down at a laptop plugged into the dashboard.

Why the drama? Once powered by a conventional gasoline engine, the 1976 Porsche now operates on 18 high-tech batteries--the result of work by dedicated MIT students and their mentors.

Converting the car to an advanced electric vehicle is an achievement in itself and serves to demonstrate the viability of the technology. But for the students, the real fun starts now. Said mechanical engineering graduate student Craig Wildman, "Now we get to take data while we're driving. We can record everything that happens on a laptop, come back and change parameters, and test drive it again." With the Porsche as a test platform, the students can monitor conditions in the car while looking for ways to increase efficiency, performance and range, and to bring down costs. 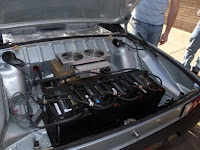 The Porsche was donated two years ago by Professor Yang Shao-Horn of mechanical engineering and the Electrochemical Energy Laboratory, who with her husband, Quinn Horn, bought it on eBay and made it available to students interested in converting it to electric power. In addition to providing an unusual opportunity for hands-on learning, the project will ultimately yield information valuable to Shao-Horn's research on advanced batteries.

"In the laboratory we work on materials to make batteries safer, last longer and have higher energy," she said. "But we are also interested in gaining a good perspective on the system. What's involved in building an electric vehicle, and what's required of the batteries?"

The student project took off last year when Valence Technology Inc. donated 18 lithium phosphate rechargeable batteries valued at $2,030 each, plus a battery-management system. The team began by removing the original engine, exhaust lines and fuel tank and installing an electric motor and motor controller, the batteries and battery-management system, a battery charger and various smaller components. Each of the batteries is equipped with a built-in computer that monitors its conditions--ideal for the data-gathering task.

However, getting all the computers to communicate with one another and with the battery-management system--a separate computer--proved a challenge. While the students had made great strides with a commercial converter kit, they ultimately had to scrap it because it was designed to handle 12 conventional lead-acid batteries rather than 18 lithium ion batteries. They subsequently redesigned the wiring and reprogrammed both the motor controller and the battery controller.

The two test drives thus far have been confined to MIT parking lots, so serious data-gathering is yet to come. In the meantime, Irene Berry, team leader and a graduate student in mechanical engineering and the Technology and Policy Program, has done some performance estimates with a vehicle-modeling computer program. She found that the Porsche should have a top speed of up to 100 miles per hour with an estimated range of 130 miles before the batteries need recharging--a task achieved by plugging it into a wall socket for about five hours. The car should consume about 185 watt-hours per mile of electricity, the equivalent of about 65 miles per gallon of gasoline.

What's next for the electric Porsche? One idea is to modify how the batteries are wired together. "We should be able to change our range and performance characteristics very easily," said Josh Siegel, a freshman who has been restoring cars in imaginative ways since he was 14. The students are also thinking about developing conversion guidelines that will enable others to do what they've done--without the fuss.